About the Society of Ploughmen

The Society of Ploughmen was founded in 1972.  It is a registered charity run by volunteers from the farming community.  It is responsible for the organisation of the British National Ploughing Championships and for managing the England World and European Ploughing Teams.

With more than 250 local ploughing societies affiliated to it and a membership drawn from ploughmen and women from all over the world, the Society is a vibrant, thriving organisation and an influential member of the World Ploughing Organization.

However, membership is not restricted to ploughmen and women alone.  Anyone can join and there are many members who joined purely out of a love of farming and the countryside.

Promoting the art and skill of ploughing

Good ploughing still lies at the heart of proper soil management and the Society's main aim is to encourage and promote the art and skill of ploughing.   Ploughing not only improves soil structure by helping drainage and aerating the soil, it also helps to preserve the land for future generations of farmers.

'New blood' is actively encouraged by the Society and the annual Young Farmers Championship attracts a growing number of entries each year, and increasing number of whom are girls.

Join the Society of Ploughmen

To fulfil our objectives successfully, the Society needs the support companies and individuals through donations and sponsorship.  We also need the support of a large membership of both ploughmen and women and people with a love of farming and the countryside.

So why not help us do that and become a member.

A Brief History of the Society of Ploughmen

The Society of Ploughmen was formed in 1972 to enable the  British National Ploughing Championships to be held annually.

The first twenty-one British National Ploughing Championships were organised by the British Ploughing Association which unfortunately foundered financially after holding the 1971 World Ploughing Contest in Somerset.

A meeting was arranged in a village pub in the Doncaster area which was attended by eighty enthusiasts from as far afield as Cornwall, South Wales and Central Scotland.   It was unanimously decided that a new society be formed and a working party was nominated to formulate the aims of the new society.  Donations were given and £84 was collected by the end of the meeting for the new society.

The working party - consisting of the following representatives -

The articles of association were drawn up by the working committee and the Society was incorporated as a Limited Company.  The first Directors were elected on 17th October 1972.

The 1972 British National Ploughing Championships were organised by the East Suffolk Farm Machinery Club with the help of many ploughmen from all parts of the country and the profit of £1,054.04 was given to the Society of Ploughmen.

Ken Chappell (senior) 'volunteered' the services of his two sons - Ken and David - as joint secretaries and found a site at Thorpe Willoughby, near Selby, North Yorkshire for the 1973 Championships.  The match was a great success and the Society of Ploughmen has since gone from strength to strength.

Ken and David Chappell continued as General Secretaries until David retired from the position in 1985, though continuing to be a Director; and Ken was appointed as Executive Director, continuing in that role until his retirement in 2017, again he continued on the Senior Committee.  In appreciation of his work and commitment, the Society decided there should be a Supreme Champion title and awarded The Ken Chappell Trophy as an annual award for the winner.  Sue Frith, who had worked as Assistant Secretary for the SOP since 1983, was appointed Chief Executive in 2017.  Each year a new President, Chairman and Vice-Chairman are elected by the members at the Society's Annual General Meeting.  The Directors and Committee Members are also elected at the AGM.

Since that first match organised by the Society of Ploughmen in 1973, a British National Ploughing Championship has been held annually in a different part of Great Britain, with the exceptions of 2001 when it had to be cancelled due to the national Foot and Mouth outbreak and 2020 which was cancelled due to the Covid-19 pandemic.  They have also hosted three successful World Ploughing Contests - in 1984 (Wispington, Lincolnshire), in 2000 (Grange-de-Lings, Lincolnshire) and in 2016 (Crockey Hill, York), all with the support and help of a band of volunteers from the farming and ploughing communities. 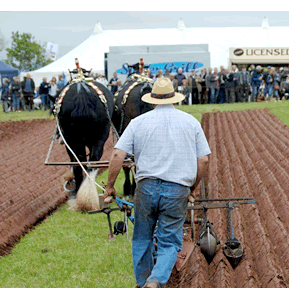